Recently, I journeyed to the Wizarding World of Harry Potter at Universal Studios in Orlando, FL. I’ve been a fan of the Harry Potter series since the first book came out. We’ve read all the books and watched all the movies – more than a few times!

It was a lot of fun. We got wands, tried out a few of the spells, consumed much frozen butterbeer, and generally enjoyed immersing ourselves in a fantasy world for a couple of days. I got a break from the world of work, and instead just had fun for a few days.

Aside from giving me a break from the stress of work, the immersing me in an alternate world of magic and mystery. The time away helped to bring back my sense of wonder. 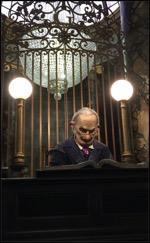 We so often get tied down in the mundane realities of work that we forget to stop and look around .. to really connect to the world. We forget that there is magic in life. Not the fireball and lightning bolt type of magic, but the subtle, shifting modern magic. This is the magic that we can tap into, the magic of connection and creation.

This is the relationship that is critical that we retain, and work to maintain. This relationship to connection, to creation, to each other, and the world at large.

If you are lost in the minutia of daily living, take some time to read a book, immerse yourself in a bit of fantasy, and remember that magic is alive!