As I mentioned in my last post, I make a lot of offerings in my daily practice 🙂  Five or six times a week, I make devotional offerings to various Kindreds.  Most of the time, I’m making offerings to the gods that I work with more closely, some of the times it’s to my ancestors or to the local nature spirits.

Offerings are not intended to drive you broke, or be a huge sacrifice all of the time. Offerings are more like when your friend comes over and you offer them a drink, or some food.  Much of the time it’s something that you can easily afford, but you still pay attention to your guest’s needs and desires.  I wouldn’t offer salami, cheese and crackers to a vegetarian, for example, but something more appropriate for them like carrots and hummus. Larger sacrifices are appropriate sometimes, but not every time.

I think that it’s very important that the offerings that you make come from you in some way.  Maybe you purchased the offering, maybe you made it from purchased components, maybe you grew them … the idea is that you put some of your own energy into it.  This energy can come in the form of money, time or attention – and is most commonly some combination of the three.

Much of the time, I make offerings from combinations of dried plants (sometimes from my garden, sometimes not), gemstones and incense. These kinds of offerings are most often gathered in a dish on my altar then later are scattered on the ground or offered to the fire. Other times, the offering is in something that I have crafted – usually these are donated to charity, but sometimes they go to the fire. When it’s appropriate, I will often also offer drinks – alcoholic and not, home made and not.

The key thing about offerings is that it’s personal. What you give must have meeting to you and to the being to whom you are making the offering. If you’re ever wondering what offerings to give to a being – ask them, do some research, do some divination or trance work, and see what feels right.

If you’d like to dig further into the idea of Sacrifices, I recommend “Sacred Gifts: Reciprocity and the Gods“ by Kirk S Thomas. Thomas goes into the history of offerings and sacrifices and why we would want to do them.

On Samhain night this year, I took the offerings that I had made over the last season and burned them in a cauldron on my grill. The grill itself is a gas grill, but I was using it for a safe space to burn my offerings.

Multiple times a week, I make offerings in my practice. They’re usually dry offerings, but sometimes include oils or resin incense.  Since I make these offerings on my indoor altar, it’s difficult to burn them as I’d prefer.

Before my grill, I’d take my cast iron cauldron and burn the offerings on my concrete patio that’s a bit hidden from my neighbors. I put a layer of Epsom salts in the bottom of the cauldron, and soak it in a bit of rubbing alcohol then light the flames.  Using tongs I’d place the offerings onto the flame in bits to burn. Because the flame was pretty open, I’d have to watch it the entire time.

Now that I have the grill, I have the option of closing the lid and letting it burn.  I do like to watch the flames just in case.  I will also sometimes sing songs to the Kindreds while I’m burning the incense to make it more spiritual and not just practical.

As you can see from the cauldron, I have a decent amount of offerings to burn! I think I’m going to get a bigger container to burn them in for the future.

If you live in an apartment and are allowed to have a grill – of any kind – it’s very useful for burning offerings in addition to cooking.  The key is to have a safe place to have a fire. The more contained the fire (like on a tray or in a pot) the better to make clean up easier. Don’t put anything toxic on it and make sure to clean the grill well before cooking food on it again.

I find that I have very limited time in the mornings – it’s a balancing act of getting to work early enough, and making sure that I get enough sleep. Even with the limited time, it’s still important to me to have time for morning devotionals, but how do I honor all the beings I want to honor?

My solution was to honor different beings on different days.

I blend Welsh and Norse Hearth Cultures in my practice, so my daily practices reflect that. The challenge for me with doing Daily Practices has always been finding time to do the work.

Five days a week, my devotions are specific for one of the Kindreds or a specific Deity – a different Being or set of Beings every day. Saturday and Sunday are more flexible. Some weekends, I will do trance, or a full Core Order of Ritual rite.  This way I can fit my devotions into my busy life as well as have time for the work for my courses.

If you’re having a challenging time working with multiple Beings, maybe you can try divvying up the days. 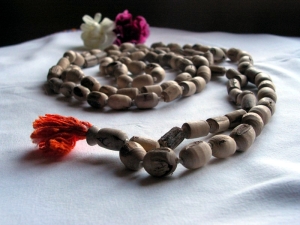 Recently Laine from The Lady’s Quill over on Patheos and the Facebook group Virtual Sessrumnir, challenged the devotees of Freya to create a short prayer that would be appropriate for repeated use like a mantra or with prayer beads.

I will often use the following phrase from Ian Corrigan as a mantra for getting myself into the right head space:

Fire, Well and Sacred Tree
Flame, and Flow, and Grow in me.

I supposed that could be considered an appropriately repeated prayer. I certainly use it as a mantra when I’m scattered or need help focusing.

For Freya, though, we need something a bit more specific.  I originally thought of creating something that reflected her many aspects, but there are a lot to include.  I ended up settling on an aspect that I don’t often work with – her warrior spirit.

Vanadis
Guide my sight
That I may fight this fight.

It seems to me lately that we may need help fighting for our rights and for equality, so this might help.

Image credit:
A Japa mala, or set of prayer beads, made from Tulasi wood by GourangaUK. <https://en.wikipedia.org/wiki/File:Japa_mala_(prayer_beads)_of_Tulasi_wood_with_108_beads_-_20040101-01.jpg#filelinks&gt;