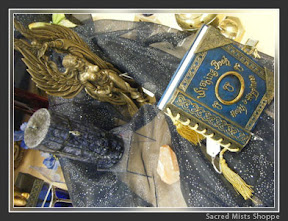 Over on The Deepest Well, Aine has a series called The Witch’s Circle.  This week she began a conversation on Spells.

This time in The Witch’s Circle the discussion will be about spells.  What are they? How important are they in a Witch’s/Pagan’s practice?  Is there a correct way to do a spell?  What about rules?

Spells, to me, are a way to focus our intent.  They are more than just a bunch of words and tools and actions, the intent is the most important part.  You can cast a spell silently, without tools or without motion, but you can’t cast a spell without intent.  Crowley defines magic as “the Science and Art of causing Change to occur in conformity with Will” .. to will something gives it intent.  Spells are about causing change, and thus need intent to fuel them.

Spells can range from elaborate, ceremonial affairs to simply “thinking hard” about a particular outcome.  Modern “how to be successful” gurus have already figured this out and teach it.  Visualize yourself successful, they say, and thus you shall be.  They tend to gloss over all the work that you have to do in the meantime to get there, but they have the general idea.  You have to be able to visualize your outcome, to push your will towards it, to make change happen.

It is important to understand that spells are a way of directing our intent, our will, and not only an expression of our belief or worship of the divine.  To me, Spells ARE an important part of a witch’s work as that work includes affecting change both within ourselves and within our environment.  However, you can be a follower or worshiper of a pagan religion without doing spells.

As important as spells can be, there is no right or wrong way to do them.  The “correct” way of to do the spell is determined by the type of spell, your traditions, and the situation.  You’re not likely to have the tools for a high ceremonial spell if you’re lost in the middle of the woods!  An accomplished witch should be able to cast spells no matter what the circumstances, even if he or she has a preferred method.  Many of my spells involve lighting a candle, burning an offering, and possibly a piece of paper with my objective. However, I’ve also worked much more formal magic and magic with no tools.

The rules are similarly flexible … mostly.  While you should only do spells that you’re okay with doing, you should always consider the repercussions of your spell.  While I don’t believe in the Wiccan Three-Fold Law, I do believe that energy that you put out into the world does come back to you eventually.  If your spells are focused on doing good, improving yourself, and helping others to improve if they choose, then you should be okay.  Forcing another to your will is manipulative and has the potential of backfiring on you, especially if the other person figures out what’s happening!

You need to figure out what’s best for each situation before you cast any spells.  Don’t forget that sometimes physical and practical solutions are the better solutions.  The well placed word (or foot) can work as much magic as the most intricate of spells in the right situation.

What about you?  How do you view spells?